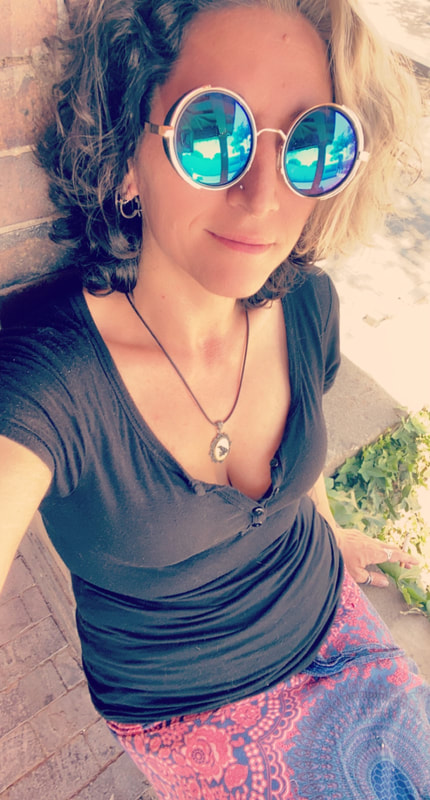 About Me
I am a Spiritual Surrealist painter from New Mexico, having a family foundation of centuries here. My work is an evolution of my journey through navigating connection and relationships, spirituality, ideology and imagination. Through my work, I push myself to connect and understand the ethereal nature of being and the universe. I am inspired by philosophy, existentialism, emotion, Sacred Geometry, the interconnectedness of the Universe, and the relationship between vulnerability and power. Encompassing the beauty and repetition in nature on both the large and small scale and examining it on a deeper level. I believe in involving my audience in my process as much as possible, and live paint at every event. Inviting connection and exposing myself and my process, and creating an open, authentic and vulnerable dialogue.

Classically trained with a BFA in Fine Arts from the University of New Mexico, My work reflects the influences of Surrealism, Kahlo, Dali, Grey, Magritte, Geiger, Escher, Picasso, and as well as Mannerism, Modernism and Spanish Colonialism. Active in the community, I can be found vending and live painting at the Downtown Grower's Market, The Rail Yards as well as numerous galleries and ArtsWalk events throughout Albuquerque and Santa Fe, and available at Metal The Store. I started Golden Spiral Designs in 2016, and have partnered with William Wooten to create Pigment Pushers, a painting event and class at numerous restaurants and bars in Albuquerque. I have been featured and recognized in group and solo exhibitions, including Solo exhibitions "Lost & Found" 2020 and "Exposed" 2019, OT Circus. ABQ Pride winner, Best In Category for Oil Painting, ABQ Pride 2018 and Audience Choice 2017. Featured Artist at the Rail Yards Steam Zone 2017. And have recently expanded to the Contemporary Hispanic Market 2019 in Santa Fe, and the New Mexico Artisan Market 2019/2020.

Artist Statement and Philosophy
The search for purpose, meaning, and the divine propels us through life. The inherent order and beauty in chaos has fascinated people for millennia.
Throughout all of our journeys we are constantly battling with how open we are with others, and what we reveal about ourselves. Sometimes we connect profoundly, sometimes we get hurt, sometimes we lose those closest to us.But we should never let it stop us from being present, embracing our authenticity, and allowing others to be open and present with us. I believe vulnerability is strength
It is brave to be exposed and show your true self.

When we are exposed and let others see our souls and the universe inside of each one of us, we allow them to share themselves and those connections stay with us forever

I have chosen to be exposed, in life and through my art.
Each one of these pieces shows a different aspect of the duality of vulnerability and strength. And the connection we all share.
This is ultimately what drives my exploration and creativity and I use these concepts to connect my audience to each other and the spirituality throughout the universe.
I continue to experiment with different mediums, primarily in Oil, Acrylic and chalk pastel. Ultimately, I am attracted to what will allow me to communicate best what I see in my head, and my heart. I frequently use a black background rather than white, reminding me of DaVinci and his thought, “A painter should begin every canvas with a wash of black, because all things in nature are dark except where exposed by the light.” Though I express specific ideas and questions through my art, it is not my job to tell the viewer what or how to feel about it. The audience and their perception is equally important to the process of art and its message. I leave you with this:

“The most beautiful experience we can have is the mysterious. It is the fundamental emotion that stands at the cradle of true art and true science.”
― Albert Einstein, The World As I See It
​
Exhibitions and Awards